Leaving one library system to enter another can give one a sense of
déjà vu.  At least when it comes to weeding the books.

Back when the Donnell Central Children’s Room across the street from the MOMA had to weed down its books to fit in the new location on 42nd Street, we did some EXTREME WEEDING (I’m using capital letters to emphasize the extremity of the situation).  A lot of oldies but goodies fell by the wayside.  Then I moved to the Evanston Public Library system.  They are undergoing a big weeding project in their children’s room and lo and behold many of the titles I weeded back in the day were there on the carts, ready to be weeded yet again.

They are the same books because they were well reviewed in their time, maybe even garnering a couple awards here and there, but they didn’t have staying power. The elusive art of writing a book that stays in hearts and minds not just for a couple years but for decades on end is impossible to teach.

With these thoughts tooling about my brain I went over to my wiki of reviews (I need to update it with my recent reviews, but that’s neither here nor there) and looked at some of the old titles there.  I started posting my reviews when I started my blog way back in 2006, though I’d been writing them on Amazon for a couple years before that point.  And the books that were the cream of the crop since ’06 . . . well, some of them just don’t get mentioned by much of anyone anymore.  Remember Fortune Cookies by A. Bitterman or The Mailbox by Audrey Shafer?  Some of you do.  Others, not so much.

So here’s a bizarre idea for a series. I’m going to revisit an old review of an out-of-print book once in a while.  Not with any real hope of getting it republished.  More, just to shine a light on the fact that the sheer number of titles published in a given year often leads to hidden gems that stay that way.  Hidden.  And today’s lucky little number is . . .

Originally published in 2006, the book got a nice round roster of favorable reviews.

It didn’t garner any stars but everyone seemed to really enjoy it.  It was author William Loizeaux’s first novel for children and he would later go on to write the also charming Clarence Cochran, A Human Boy.  I liked it very much and it would appear on NYPL’s 100 Titles for Reading and Sharing list.  And so, just because I enjoyed it, here is my old review for Wings, by William Loizeaux. 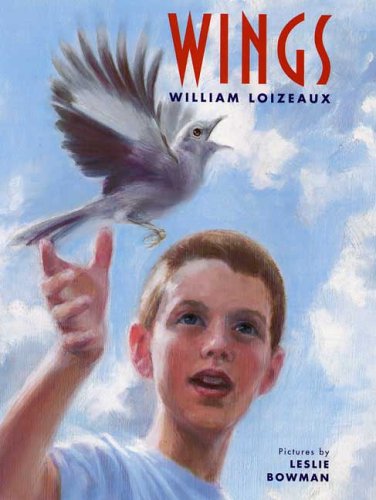 In a February 8, 2006 edition of Christian Science Monitor, author William Loizeaux offered these thoughts on the “elastic” nature of the personal memoir: “memoir is the creation of a mind remembering. The writer recalls and reflects on the past and evidence gathered about that past. Usually, the more evidence the better, but as any memoirist will tell you, remembering is always a tricky business.” With memory such a tricky beast and literary scapegoats like James Frey to draw attention to the facts surrounding a person’s past, it’s seems safest to do as William Loizeaux has done and fictionalize an important moment in one’s past instead. You cannot be held responsible for what is and is not true when you produce fiction. Instead, if you happen to mention after the fact that such n’ so in the book really did happen to you, you’ll meet someone delighted with this startling piece of evidence. And that certainly beats the complete stranger that may take you to task over whether or not you really did, say, comb your hair counterclockwise on the 15th of November. Loizeaux, however, has gone even farther and has turned a small moment from his childhood into a children’s book. It could have been awful or patronizing or puffed up with self-regard. It could have been, but it isn’t. Instead, it’s a misleadingly simple tale of a boy and his mockingbird. A tale worth remembering.

Nick found the bird standing in the center of the street looking like nothing so much as a circular ball of feathers. As it turned out, it was a baby mockingbird, alone and abandoned by its parents. After naming the little creature Marcy, Nick comes to care for the bird with a little help from his mother and his best friend Mate. Once she has thrived under his care, Marcy is able to offer Nick a great deal of comfort. She listens to his problems, whether they involve how his father died in the Korean War or the man who’s currently courting his mother. The book follows the two friends as they experience a whole summer together. But when a family trip means that Marcy and Nick must separate, the boy must learn how to let go of something he loves, even if that means losing it along the way.

Children’s librarians tend to eye adult authors that have crossed over into the world of kiddie lit with a wary skeptical eye. Adult novelists, after all, have proved time and time again that they are not always able to produce a believable title for children. Such writing often requires an entirely different set of muscles, and too often you’ll see these authors either going too far and creating something faux-childish or not far enough, creating a book of laughable complexity. Allow me to set your mind at rest in the case of Mr. Loizeaux. With an ease that is sure to infuriate his frustrated adult-authorial brethren, Loizeaux’s “Wings” reads as if it was written by a man who has been penning children’s books for years. He doesn’t speak down to his readers or insult their intelligence. His adult books have been described as having a “luminous clarity” and that same clarity is what makes him such a perfect children’s book writer. Nothing in “Wings” feels simplified. Just simple.

Nostalgia, should anyone ask, is very big right now. Peruse your local bookstore and you’ll see title after title set in 1950s or early 60s American. Sometimes this is because the author looks back on the political situation of the U.S. at that time and can draw parallels to the current administration. Sometimes it’s because they see the post-war era as a “simpler” time and they want to return to that moment, warts and all. But the impetus for Loizeaux to set his book then is neither of these. Rather, this is his story of what happened to him, personally, when he was growing up in the early 60s. The time period is not the focus here. It’s important to the story, sure, but it’s also incidental. Throw in some iPods and this book could just as easily take place today. But it didn’t. It took place in 1960, so that’s when it’s set.

A reviewer would be amiss if they did not happen to mention illustrator Leslie Bowman’s work on this book as well. With a title of this length (138 pages) the question of whether or not to even have an illustrator would have been difficult to figure out in the first place. You don’t want to drive off the older readership that would eschew “baby” books with pictures. On the other hand, if the artist is able to add something to the experience of reading the book, wouldn’t that person be an asset rather than a drain on the book’s reception by children and adults alike? It doesn’t hurt matters any that Ms. Bowman was undoubtedly the perfect artist to place alongside Loizeaux’s prose. Bowman’s work in the children’s book field has been sparse over the years, though not without praise (as with her work on “The Canadian Geese Quilt” by Natalie Kinsey-Warnock). Now, however, it feels as though she’s found the perfect fit. Images that look as if they were done in graphite are drawn in a realistic style. Marcy looks like a real mockingbird, white patched wings and all. The boys who raise and love her are crewcutted and haven’t a trace of cartoonishness to them. For this book, that was essential. I don’t like to consider what the alternatives could have been.

In his Christian Science Monitor article, Mr. Loizeaux had this to say, “At its best, a memoir combines hard research, an engaging narrative, the intimacy of lyric poetry, and the thoughtfulness of an essay.” He was, of course, referring to adult memoirs, but it’s not stretching the truth to say that this applies perfectly to “Wings” as well. You’ve facts on real mockingbirds provided in the back of the book in Loizeaux’s, “A Note On Mockingbirds” (though a source of some sort would not have been out of place). You’ve an interesting story that kids will want to know more about. You’ve the lyric poetry of lines like, “It’s hard to describe just how good this felt: to call something wild from out of the sky, and then to see her with her wings so wide.” And finally you have a sense of the thoughtfulness that went into the creation of the tale. “Wings” also performs the one act a book must fulfill to truly become a classic. It touches adults just as closely as it does children. Anything that can affect a person, regardless of age, is a thing worth remembering. A memorable children’s novel.

Notes On the Cover: Brilliant. Bowman’s a smart cookie and this is exactly the kind of picture that’s going to pull on children’s hands with the force of a strong animal-centric magnet. It also makes it perfectly clear that this is a “boy book”, or at least has a boy in it. Reluctant readers may prefer it for that reason. However you care to look at it, this is how a cover should be done. A nod of the head to Melanie Kroupa.