Kids today. They don’t know how good they have it. Man, when I was a wee tot our only strong female characters were Princess Leia and She-Ra. I mean, maybe Sarah Connor or Ripley, but that was only if you snuck adult movies on the sly. These days you can’t swing an axe without hitting dozens of strong, fantastic female characters. Don’t think I’m complaining! I’m not! I’m just saying kids don’t appreciate what they have.

Take Barb the Bezerker for instance. What you’ve got here is all the headstrong bravery of a warrior combined with some bashing and crashing and the occasional yeti. Or, as the official description for this graphic novel puts it:

“She-Ra and the Princesses of Power meets Dav Pilkey’s Dog Man in this sidesplitting graphic novel about a young Berzerker who has to rescue her fellow warriors from the evil villain Witch Head before he destroys the world!

Barb is a Berzerker, one of a group of warriors sworn to protect the land of Bailiwick from the scourge of monsters that plagues it. But the fearsome crew seem to have met their match in the nefarious Witch Head. Using power from his magical sword, he tricked the Zerks and took them captive. Only Barb was able to escape, and she took Witch Head’s Shadow Blade with her.

Now it’s up to Barb to free her fellow warriors so they can stop Witch Head from taking over Bailiwick. On the way, she’ll battle vampire goat fiends, snot goblins, and a giant with serious foot odor issues (but don’t mention that to him; he’s very sensitive about it). Luckily, she’s got her best friend, Porkchop the yeti, to help her.

But the power of the Shadow Blade has a mind of its own, and the deeper Barb gets into her quest, the harder it is to keep the blade’s awesome power under control.”

The creators? A pair of dudes! Specifically dad dudes. Dan Abdo and Jason Patterson were kind enough to answer my questions about Barb, berzerking, and how one conjures enough general mayhem to retain the interest of today’s jaded youth.

Betsy Bird: First off, thanks so much for coming on my blog! Now I have to ask you, every book has an origin story and I’m going to bet good money that this one is worth hearing. Where did this book come from?

Jason Patterson: Wow! The origin story of Barb! We have been toiling so long in the comic mines, it’s hard to remember how we got into this big crazy adventure! Dan, do you remember how this all got started?

Dan Abdo: Thanks for having us! We could talk comics all day long! Jason and I are always pitching ideas to each other for new comic, cartoon, and film projects. I remember we were eating sandwiches in a little restaurant (shout out to Grey Dog) in the west village of Manhattan. We love fantasy, Tolkien, G.R.R. Martin, D&D,  and we were extolling the kick butt nature of the original He-Man characters. Especially the secondary characters: Trap Jaw, Beast Man, Fisto, they were all so cool and also so silly. We both have kids (including, daughters) and we asked ourselves why isn’t there a kick butt, super fun character that our kids, and our girls specifically, can look at and be like, “that’s me”. So we came up with Barb and her best friend Porkchop evolved as a foil to Barb’s characteristics.

JP: Dan is making it sound like we knew exactly what we were doing, but I think one of the really fun parts of Barb is we just kind of jumped into making a comic, without totally knowing where we were headed. It was an exciting, terrifying leap of faith. Not unlike setting out on a fantasy adventure with a map, some supplies and your best friend. Dan had a great idea to sign up for a table at MoCCA, which cost us a hundred and fifty dollars. It gave us much needed motivation to finish something! One hundred and fifty dollars!

DA: That’s true! Once we settled on the Barb idea, we decided that we wanted to make a physical comic book. We really wanted to create something that you could hold in your hand, and physically show other people. So we signed up for the MoCCA fest. We knew that we’d finish the book if we had to have something to show for this comic convention. So we self published a 45 page black and white comic.

JP: The most amazing thing for me about making the mini comic was how Barb really sprang to life on the page. As we drew and wrote the story, we realised we were really just trying to keep up with Barb. She was driving the story and Dan and I were just building the world around her.

BB: Shoot, I’m still stuck on you having reminded me about Fisto. I was quite the He-Man connoisseur in my day, I’ll have you know. Now having read a fair amount of vikings, barbarians, and even the occasional Goth, I don’t see a lot of berserkers showing up in my children’s literature. What’s the allure of your average, everyday berserker? Why go that route?

JP: Our knowledge of berserkers is pretty murky (we probably shouldn’t be admitting that). My understanding was that these warriors in battle could summon great speed and ferocity, so much so that they could overwhelm enemies of greater size and strength. They would go Berzerk! Which pretty much describes how we feel about our kids. They have so much energy and can easily defeat us!

DA: As a dad, I remember I was always telling my daughters to calm down. There are some places where you can’t be totally insane. So we thought what if, being wild, being a berzerker, was our hero’s power and also her weakness. This wildness is a strength in her and is also something that she is going to have to master. Jason came up with the brilliant idea that every time Barb “zerks out” it wipes out her energy. It has a cost. That was this amazing piece of character design that has proven to be super helpful in crafting these stories. She’s not superman, she can’t just defeat her enemies easily, she’s flawed, and learning, and questioning things all the time. Just like real kids.

BB: It’s not that there weren’t strong female characters when I was a kid. I may have mentioned that She-Ra was a thing back then (though significantly less cool than her 21st century incarnation). But… how shall I put this? Those strong female characters weren’t really allowed to have a sense of humor. When you were making Barb, what were you going for? How did you plan on making her a character that a kid in 2021 would identify with?

DA: Jason cracks me up all the time. We spend our days writing, drawing, and goofing around and it’s the best. We pretty much just do that on the page too. We write and draw to make each other laugh, and it appears that we have the comedy sophistication of 8 to 12 year olds.

JP: I think one great touchstone for us was Spider Man. As a kid, Superman and Batman were so serious and grown up. Like you said, they weren’t really… funny. But Spider Man has a great sense of humor. I think it’s part of the fact he’s in way over his head. I think Barb shares that, she’s an underdog in a lot of ways and humor allows her to level the playing field a bit. Side Note: Dan and I often find ourselves in way over our heads too, and cracking each other up beats hugging each other and crying. But sometimes you gotta do that too.

BB: Amongst her other charms, Barb has a tendency to lapse into key phrases (“Drag”). Where on earth did those come from?

DA: That’s how we talk. We’re both totally rad.

BB: Gnarly. So how many Barb books do you envision doing, ultimately?

DA: We are finishing up the second installment right now. There are lots of places Barb could go and the world of Bailiwick is huge! We’d love to keep on making Barb comics for a long time!

JP: Yeah, it’s really cool how the world keeps expanding around Barb. It feels like we keep finding new places for her to go and new enemies for her to face! Barb truly feels unstoppable. It’s just me and Dan who might run out of steam… making comics is sooooo much work. But sooooooo super fun!

BB: Finally, aside from Barb herself, is there anything else you guys are working on right now?

JP: We also have a couple more ideas rattling around inside us. We might need to go back to Grey Dog and eat some more sandwiches.

A big thank to Jason and Dan for answering my questions, and to Audrey Gibbons and the folks at Simon & Schuster for making it happen. Barb the Last Bezerker is on shelves now, so go on, run, and get yerself a copy.

"... A relationship of reciprocity with the Earth." Diana Sudyka Discusses Her New Picture Book, Little Land

Abecedarian Movement and Dance: A Q&A with Corinna Luyken About ABC and You and Me! 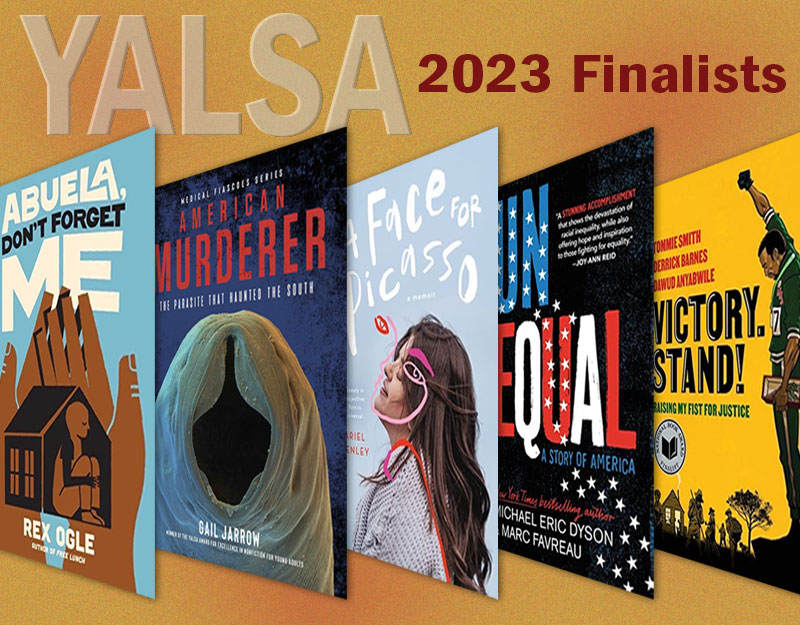