Review of the Day: Mr. Nogginbody Gets a Hammer by David Shannon

You know that old phrase, “A victim of your own success”? I think about it a lot in terms of bestselling children’s authors. If you’ve done marvelously well because you’ve taken risks in the past, are you less inclined to take more risks in the future? Do you feel hampered in some way by the expectations set upon you? I think for some creators, you have to find a backdoor. And that backdoor, honestly, tends to be found in small publishing houses and small imprints. That’s why you might see Mac Barnett do a book with McSweeney’s or watch people like Philip and Erin Stead follow their editor Neal Porter over to Holiday House. And maybe it’s why David Shannon, beloved star of Scholastic with his No, David books and other titles, has brought Mr. Nogginbody Gets a Hammer to the new imprint of W.W. Norton and Company, Norton Young Readers. Happily, this book is wacky, weird, strange, and downright hilarious. It’s the readaloud oddity you’ve been looking for, if you’re the kind of parent or librarian who likes alternately befuddling and amusing children. I don’t know what it took to make Mr. Nogginbody come into the world, but whatever confluence of the planets allowed this madcap exercise in increasing hijinks to happen, I say let’s have more of it! In a sea of picture books that remain unmemorable five minutes after you’ve read them, Mr. Nogginbody hits the nail on the head. Hard.

Nothing ruins a good slide down the hallways in socks like a pesky nail. Confronted with such a miscreant in his own home, Mr. Nogginbody (a guy with a noggin for a body) heads (no pun intended) on over to Dan’s Hardware Store to find something to solve his problem. Given a hammer he experiments a bit and then discovers that all it takes is a few taps and he’s fixed his problem! Giddy with his success, Mr. Nogginbody sets out to find other nails to fix, at which point things quickly go south. Hammer in hand he sets about “fixing” “nails”. Showerheads, chess pieces, even flowers aren’t safe from the man with a plan and a hammer. But when an errant fly proves to Mr. Nogginbody that he’s taken his plans to fix the world too far, can he make things right again? Can he still fix?

Picture books, comics, and films are all sequential forms of entertainment that combine visuals and speech in unique ways. So what interests me is what happens when the creator wants to slowly but steadily increase the manic energy of the piece. You start out with a ridiculous concept (a guy with a head for a body thinks a hammer can “fix” anything and that everything he encounters is a nail) and then you gotta ramp that puppy up. This is where pacing becomes important. For maximum amusement, things have to get out of hand, but with slowly increasing fervor. Take, for example, Remy Charlip’s Fortunately. That book ramps up tension and ridiculousness with a kind of effortless hand (until it loses steam around the tigers, but that’s a discussion for another day). This book begins with two long panels that set the stage. Here, Shannon sets up the problem (the nail in the ground). Our hero is given the solution (a hammer). And then he really gets into “fixing” things. To do this, you get a lot of before and after sequences. Then, as he starts gleefully destroying the world around him, Shannon drops in lots of little jokes for the kids to get. They can feel smart that they can recognize what a real nail is, even when Nogginbody can’t. And by the time the guy is literally hitting himself on the head with his hammer, things have gotten marvelously out of hand. The amazing thing is that Shannon’s such a pro that he can reel all this back in the span of about four pages and stick the landing. Not only that, the landing even has a little bit of heart to it. How does he DO that?!

Compared to a lot of what Shannon’s been doing lately, there’s almost a simplicity to the art here. Shannon is still using thick paints in vibrant hues but he’s embracing the white of the page more than I’ve seen him do before. The first two-page spread is mostly black and white with just a couple slashes of yellow for background color. This pattern continues, to the point where when Mr. Nogginbody goes to Dan’s Hardware Store, you get a shot of the outside that, in any other Shannon book, would just be an eye-popping conglomeration of colors and shapes and sizes. Instead, there are more colors on this page than you’ll find anywhere else in the book, but there is also so much white space. Now look at the figures themselves. Mr. Nogginbody is essentially a sketchy character. His eyes are just black scribbles, for crying out loud. But once in a while you’ll get a close-up shot of a hand, and it’s beautifully rendered and highly detailed. This is evident in a scene where our hero is holding a nail and Shannon draws a hand so meticulous as to give the impression that it is close to the reader while the rest of Mr. Nogginbody is far. Shannon is using all kinds of tricks gathered over the years, so that the end result is a book that looks simple from the outside but is coming up with all kinds of new ways to present his storytelling in the meantime.

But I want to circle back around to a point I had earlier about the sheer weirdness of this book. Because generally speaking, the book publishing market is not kind to oddities. Publishers in general will rarely take a chance on a wackadoodle book, worrying that American reading audiences will eschew it as too out there. They have good reason for this. Anyone who has ever tried to sell a parent on a picture book filled with, let’s say, Eastern European illustrations, will be familiar with that look that comes into their eyes as they say, “I don’t know why I don’t like the art. I just don’t.” Americans are super comfortable with the super familiar. That’s why so many picture books just sort of blend together after a while. Kids, fortunately, are a little different than their gatekeepers. Some will only truck with the familiar, but others are a little more curious. Now I know for a fact that there are hoards of small children out there obsessed with tools. This book has the word “Hammer” in its title and then actually shows a hammer on the cover. Flip it open you can see a guy merrily hammering to his heart’s content, so I’ve no doubt it has an edge over other weird books because it can appeal to a not-so-weird segment of the picture book buying marketplace. That said, it’s good to know that some parent, somewhere, will buy this book for their kid, thinking it’s just another boring tool book, and will instead discover it to be this frenzied, increasingly frantic dive into the quixotic and strange. Would that it happened more often.

At its heart, this is a picture book embodiment of Abraham Maslow’s hammer (the same fellow who brought you the Heirarchy of Needs, which I can only assume will form the basis of Mr. Nogginbody’s next adventure). As the man once said, “I suppose it is tempting, if the only tool you have is a hammer, to treat everything as if it were a nail.” It’s the law of the instrument and it has ramifications above and beyond a silly little story where people have heads for bodies and hammers are thwacking everything in sight. Kids won’t care, though. As far as they’re concerned, this is just a highly amusing story about a poor use of a practical tool. And, as mentioned, this is a perfect book to read aloud to a large group of kids. It’s funny, engaging, and the art just pops off the page. When artists are allowed to let their freak flag fly, they can be capable of thoroughly awesome endeavors. Mr. Nogginbody is thoroughly awesome. Let’s hope we’ll see more of him and his odd little interpretations of the world in future installments. 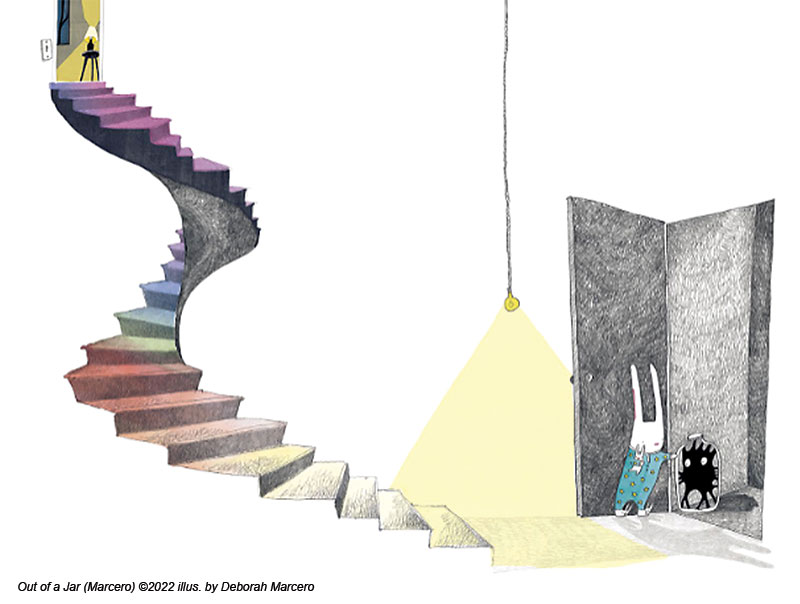